There’s a poem in Saturdays at the Imaginarium called ‘The Nameless’ where I write about things with no name. Here it is.

A few things to ponder

How can we write or speak about things if they have no name? Is it possible?

Have you ever seen or felt something that you couldn’t quite find the words to describe? How did you tell others about your experiences or your feelings?

Perhaps you used comparisons, such as ‘my tummy felt like a cat in washing machine.’ Or, ‘eating that cake made me feel the way I feel when my sister gives me one of her best hugs.’

Perhaps you used gestures (‘it looked like this’ as you made some kind of shape or movement with your body).

If you speak more than one language, you might sometimes find that you can easily say something in one language that’s harder to get across in another.

And maybe occasionally you find yourself thinking, well if there’s no good word for this, then I’m going to invent one! Well, you’re not alone…

If it’s good enough for Shakespeare

William Shakespeare, possibly the most famous writer in the world, was a great maker-upper of words in his plays and his poems. Some people say that he invented around 2,000 words that became part of the English language. Here are a few of those words – most of which seem surprisingly modern! 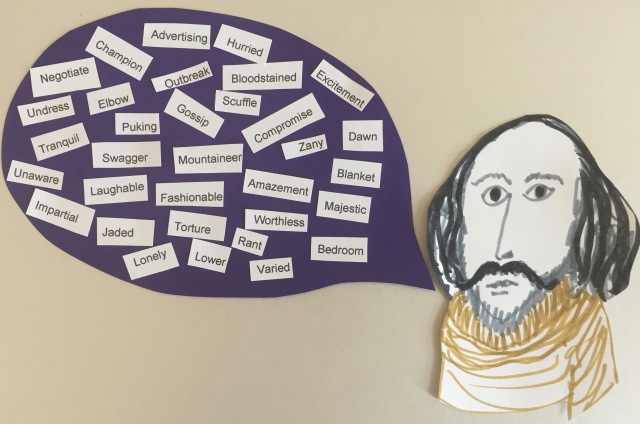 By the way, some of these words did exist already in a way, but Shakespeare reinvented them by using them differently. For example he used the noun ‘elbow’ as a verb: “I elbowed him out of the way” (which makes me wonder why we don’t say “I footed the ball” instead of “I kicked it”!).

One way to start is by making a list, either by yourself or together with friends, of some things that have no name, or that there isn’t really a good word for. The things on your list don’t all have to be objects, they could also be feelings or things that happen.

Over to you – get listing!

Once you’ve got your list, your next job is invent a name or a word for the things on the list. There are lots of different ways you can do this. Here’s a few ideas to get you started. Feel free to make up some of your own too.

Change nouns into verbs. William Shakespeare did this a lot – like the ‘elbow’ example above. Here are a couple more:

I shouldered the blame.
He friended me on Facebook.
I’ll text you.
I decided to have a go at verbing.

You can also do it the other way around: change verbs into nouns. Have you ever heard someone say “I’ll send you an invite”? Until quite recently ‘to invite’ was only a verb and the noun was ‘an invitation’ but then people started using ‘an invite’ as a noun so much that it ended up being added to the dictionary!

Connect or blend different words together

Lots of modern words use this approach. Here are a few:

Brunch: a combination of breakfast and lunch.
Cellfish: a person who uses their mobile phone (cell phone) in a way that’s rude or inconsiderate of other people.
Chairdrobe: a chair you keep clothes on.
Chocoholic: some who loves chocolate so much it’s like they’re addicted.
Cupidity: silly things we do when we’re in love.
Hangry: when you get irritable because you’re hungry.
Jeggings: a cross between jeans and leggings.
Smog: smoke and fog.
Textpectation: the feeling of waiting for somebody to text you back.
Youniverse: the world you create around yourself.
Frenemy: you know who the are, those people who are half friend, half enemy.

Another good way to invent words is to use your senses and feelings. Every word has a sound as well as a meaning, and it has a feeling as you roll it around in your mouth. So you might try to invent a word where the sound and feeling of it somehow match the meaning.

For example, if it’s a word about something uncomfortable, should it be easy or hard to say? Should it sound harsh, or gentle, soft or scratchy? How should might it or hearing the word make you feel, even if you don’t know what it means?

So clutter got its opposite declutter. Fasten also got unfasten. Build also led to rebuild. And sometimes we misunderstand.

Yesterday I ate a pudding that was a bit, y’know, gloopy. Which got me thinking about gloopdom, gloopment, gloopness, gloopize, gloopable… you get the picture.

Some words are simply shortened forms of longer words. Common examples are exam (examination), fridge (refridgerator), gym (gymnasium), lab (laboratory) and bus (omnibus). Others are less obvious, like certain words that come from older versions of the English language. Goodbye is a shortening of God-be-with-you and hello is a shortened form of whole-be-thou. Shepherd was sheep herd and fortnight was fourteen-night.

Kennings come from Old Norse and Old English poetry. In a kenning, two words are combined to form a sort of poetic way of describing a person or a thing. For example, whale-road is a kenning for the sea, sky-candle for the sun and bone-house for a skeleton.

There are lots of modern examples too, like a couch-potato, a book-worm, an ankle-biter and a four-eyes.

Just invent any random word that comes to mind!

Off you go then. You lingo-deviser you!